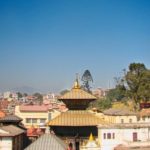 Sankaracharya was one of the pre-eminent scholar and social reformer and like all luminaries his life revolves around mysteries and more mysteries. For example, scholars place his year of birth anywhere in between 509 B.C. and 897 A.D. and we do not know when or where he died except that he died young at the age of 32.

Tradition has it that he founded famous temples on the four corners of India, that is to say, one in the East in Puri, Orissa, one in the West in Dwarka, Gujerat, one in the North in Kedarnath, Uttarakhand and one in the South in Kancheepuram, Tamil Nad. Obviously, he was seeking to unite the nation at the demise of Buddhism.

Tradition also has it that he would invite one and all in a public place and engage in debates with a proviso that the loser would be obliged to burn all his holy books. It was the time period when Buddhism had all but lost patronage and the few adherants remaining were thus ceremoniously eliminated.

Sankaracharya had made it his life mission to wipe out all forms of opposition to Hinduism and unify the nation as a Hindu nation; he was living just at the right time and the right place.

According to an oral tradition of Nepal and Tibet, Sankaracharya had then embarked on a journey to Tibet to confront the Dalai Lama. On his way, he briefly stayed in Kathmandu and founded the Pashupatinath Temple thus setting up a precedence that it is presided over only by priests from South India. In Lhasa, he challenged the Dalai Lama to a debate when the Dalai Lama took time to travel physically in astral and having conferred with the Celestial Buddha in heaven returned and counter challenged Sankaracharya to repeat the same. The Pundit was no less accomplished for he too ascended to heaven but on his returned journey mistook a Lama’s broad sword to be his seat, slashed his throat and died instantly.

This is the Nepalese version of Sankaracharya’s death and the Tibetans too have an almost similar account of the episode of his end. In India however, Sankaracharya’s biography is well recorded except details of his death are not found recorded.