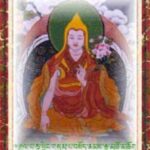 Buddhism began to take firm roots in Tibetan soil during the reign of King Ti-son Detsen (756-797 regnal period) as he was ably supported by his Nepalese Guru Padmasambhawa, Actually, the Tibetan Buddhism, known as Lamaism was founded by Guru Padmasambhawa which is a monastic order based on his previous experience in Nepal, Sikkim and Bhutan.

The Celestial Emperor, Jiajing Zhu Houchong was mighty pleased with the orderly life the form of monasticism had introduced in Tibet that in 1563 he brought a Mongol Prince named Sonam Gyatso, pictured left, and installed him in the papal seat in Lhasa. In order to add credibility to his plan the Celestial Emperor declared that Sonam Gyatso was the incarnation of two of his predecessors and was given the honorific of the Dalai Lama, which in Mongol language means his knowledge is as deep as the ocean blue. Thus, the office of the pontificate of Lhasa was established with great pomp and ceremony surrounded by an aura of deep veneration. Additionally, the Emperor installed two Ambans, Chinese Foreign Service Officers in Lhasa to assist the Dalai Lama in day to day administration of the land; the office of the Ambans was finally abolished in 1951 when Chinese Peoples Liberation Army occupied Tibet.

Highly satisfied with the administration of the land, the Chinese Emperor Kangxi Xuanye decided to bifurcate the temporal from the spiritual functions of the Lama and in 1665 A.D. appointed Lobsang Yeshe as the Panchen Lama. The aim of this move was to create the Dalai Lama as the head of the Tibetan Government and the newly created office of the Panchen Lama as the head of the spiritual affairs of the land. To add some authority to his decision, the Panchen Lama was elevated to the position of not only spiritual head of Tibet, he was made the ex-officio spiritual mentor of the Emperor himself.

The Emperor however, left the inter-se seniority of the two pontiffs undeclared but this has never been a cause of concern as long as they were both in Tibet. They have been provided with marks of distinction though; the Dalai Lama and his subordinate Lamas wear tall yellow hats, as seen in the picture above, while the Panchen Lama and his subordinate Lamas wear round red hats.