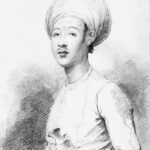 Many tribes, who are inhabitants of the Eastern Nepalese Highlands, namely Sunwars, Khambus or Rais. Yakkhas or Dewans. Yakthumbas or Limbus, Rongpas or Lepchas etc identify themselves as Kiratis. Koches, Meches, Kacharis, Tripuris and Bodo tribes from the adjacent territories of neighbouring India too claim to be Kirati and one common denominator in their claim is that they all are distinctly Mongolians.

Ancient Hindu literature mentions the presence of Kirati to be the original populace inhabiting the southern slopes of the Himalayas but does not qualify their identity in any greater details. Siva Puran contains a reference that the Hindu god Siwa (Siva) appears to his devotees in the form of a Kirati hunter. It is written in Mahabharat(a), that the hero of Pandaw (Pandava) Arjun had fought a duel with Siwa (Siva) in the guise of a Kirati which had pleased him and granted Arjun the divine weapon with which Arjun was able to defeat Kauraw(Kaurava) in the epic battle of Mahabharat.

Manu Smriti, the Hindu Code Book however, makes a categoric mention that the Kiratis donot follow brahminic instructions and hence are recognized as Sudras, Manu Smriti Chapter 10, verses 43 and 44. Based on this authority, the Gurkhas of India have now been categorized as Scheduled Tribe, or outside the Brahminic mould.

As far as the tribal identity goes, Kirati-Mongolians must necessarily include entire population of Nepal who bear Mongolian features, that is to say, Magar, Pun, Gurung, Tamang, Thakuri, Tharu, Newar, Sakya, Sherpa, Sunwar, Rai or Jimdar, Yakkha or Dewan, Limbu or Subba or Yakthumba, Lapche or Lepcha and so on.

Woodcut picture, of Agam Singha Rai: Courtesy Brian Hodgson Esq, op cit, (ref: Francis Buchanan Hamilton in An Account of the Kingdom of Nepal, page 2, 54 etc). This picture has a historical significance as it happens to be the first ever picture of a Nepaulian (that is how they had spelt the word then) the Western World had seen of a  Kirati-Mongolian. It was providential that Agam Singha Rai was saved when the Kirati Royal Family was ambushed and slaughtered to the last man while passing through the dense forest of terai on their fateful and fatal journey out of Kiratdom. Nothing more can be said about that episode and it will remain forever an inscrutable mystery. Secondly but more importantly for this epistle, that Agam Singha had kept the manuscript of Gita described just above tucked in his “patuka” (cummerbund) in he manner of all Nepalese Highlanders, when he had arrived at Fort William in 1773 A.D.