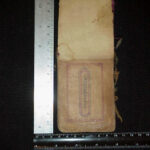 Tradition has it that Hindu priests in the centuries past committed to memory their entire scriptures and passed them down orally only to the chosen few. This peculiar custom, the brahmins explain was the proven method of ensuring that their sacred literature did not fall into undesired hands.

This is also the explanation why there is no tradition of writing mentioned in the vedic literature.

Consequent upon this momentous decision sacred literature of the Hindus came to be written for the first time; but due to the vagaries of time only a very few of these rare manuscripts are still in existence. This one, pictured here, is one of the six copies in existence.

Presented here is the last page of a copy of one of those surviving manuscripts of Srimadbhagwatgita, or Gita for short, meaning Song Divine; or the divine counsel given by Krishna (spelt also as Krushna or Krsna) to Arjun, the hero of the battle of Kurukshetra fought in the Epic Age. It is considered one of the finest poems which emphatically exhorts that man needs to do his duty above and beyond the ethical question of right and wrong.

The scribe has signed his name as Ramchandra Baburao Aras and dated the manuscript as Sambat 1196, Bhadrapada, twelfth day, dark phase of the moon, Monday which corresponds to August 28, 1139 A.D. The manuscript is in an extremely brittle condition due obviously to prolonged usage and shows its age.

The Sanskrit manuscript, eighteen chapters and in 702 verses, is written with considerable calligraphical skill but the few illustrations in it show amateurish effort.