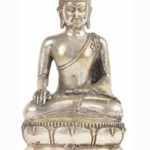 Siddhartha Gaut’m (566 – 486 B.C.), who became the Buddha, was a Kirati-Mongolian Prince of mid-western Nepal, son of King Suddhodhan and Queen Mayadebi. I shall not spend any more time than is absolutely necessary to narrate his history except the chapter which the historians have neglected to record for one reason or the other.

In the days of the Buddha, it was neither necessary nor possible to determine where India ended and where Nepal began. As a matter of fact, no country named India even existed until Colonial Britain named it so in the eighteenth century following the precedence set by the Greek two thousand years earlier.

The population of this land, during the days of the Buddha was ethnic Mongolians who are identified in this website as Kirati-Mongolians to separate them from the Mongolians elsewhere in the world.

The Buddha, therefore lived and preached among his own. One significant event of his life was that soon after his Enlightenment, according to the Swayambhu Puran, page 66, he had journeyed to Kathmandu to pay obeisance to the Adi Buddha or the Swayambhunath. The Buddha spoke the ancient language of Pali, an archaic form of Nepali, which is the mother of all tongues including Sanskrit spoken in South and South East Asia.

The Kirati Bungsawali in support of the Swayambhu Puran records that the Buddha visited the Kiratdom of Kathmandu during the reign of King Jite Dasti and proselytized the King and his subjects to the path of Four Noble Truths.

King Jite Dasti received the benediction with grace and decreed that his subjects may continue to worship their ancient deity Paru Hang (Siwa) while following the Four Noble Truths, thus ushering an era of enlightenment visible till this day and known as Siwa Margi and Buddha Margi, followers of the Siwa and Buddha respectively.